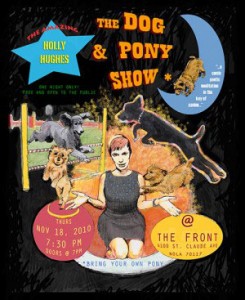 The Dog and Pony Show (Bring Your Own Pony) is a new solo performance written and performed by 2010 Guggenheim Fellow, Holly Hughes and directed by Dan Hurlin. A blend of autobiography, animal behavior, and bald faced lies, the show is a comic/poetic meditation on a midlife crisis in the key of canine. After several years as a self-described “professional homosexual” spent preaching to the perverted and getting into the craw of the religious right, Hughes disbands her one (wo)man dog and pony show, takes a real job at a prestigious university, acquiring a small pack of dogs, and must ask herself” what is sound of one lesbian clapping? (Could it be barking?)

Holly Hughes is a writer and performer, a “thespian’s thespian.” Or in the words of former National Endowment for the Arts Chairman John Frohnmayer: “Holly Hughes is a lesbian and her work is very heavily of that genre.” Other admirers have been more succinct; the late Senator Jesse Helms called her “a garbage artist,” and the Village Voice remarked “She’s hell on heels.” Perhaps the best summary of her body of work which includes 15 solo and group performance pieces was offered by the LA Times: “Holly Hughes is everything you ever wanted in a lesbian performance artist and less.” Born in Saginaw, Michigan, Hughes attended Kalamazoo College, escaping to New York City in the twilight of the Carter years. She came out as a thespian at the WOW Café, New York City’s self declared “Home for Wayward Girls.” Hughes’s work includes plays such as “The Well of Horniness,” “Dress Suits to Hire,” and “Let Them Eat Cake” and solos include: “World Without End,” “Clit Notes,” “Preaching to the Perverted,” and “The Dog and Pony Show (Bring your own Pony.) Five of her plays are included in “Clit Notes: A Sapphic Sampler, “ published by Grove. She is also co-editor with David Roman of “O Solo Homo: The New queer Performance,’ which received a Lambda Book award. A 2010 Guggenheim Fellow, Hughes is an associate professor at the University of Michigan, with appointments in Art and Design, Theatre and Drama and Women’s Studies.