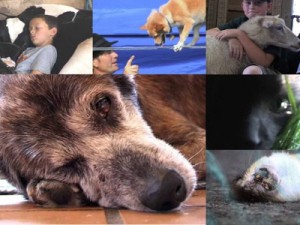 In conjunction with Holly Hughes’ performance of her new work, “The Dog and Pony Show”, Standing Heat explores relationships between companion animals and humans. Small 2D works from an international call for entries respond to Gertrude Stein’s assertion: “I am I because my little dog knows me,” whereby “little dog” references any species of companion. Who is it whom your “little dog” knows, and how is your sense of self mediated through this relationship?

Featured are new works by the internationally known new media artist Kathy High that consider interspecies communication and animal-human ways of thinking about one another. In “Lily Does Derrida”, a video essay with posthumous commentary by Lily Dog, Lily looks at Derrida’s writings and makes a case for how humans and non-humans understand one another- or not- based on her own life and adventures. Jacques Derrida wrote about animal consciousness and animal subjectivity in “The Animal That Therefore I Am.” Photographs documenting lethal encounters between cars and peeper frogs and a mixed media sculptural piece, “The Pull of Burden Waters” consider life and death issues on Burden Lake in upstate New York where High lives.

Works by Lee Deigaard consider concepts of the self as defined by dog and the intersections and boundaries of animal-human domesticity.