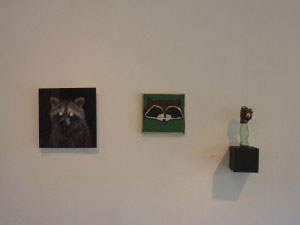 My Mom Says My Work Has Really Improved is a group exhibition, curated by Natalie McLaurin, that explores the connection between artworks made at different times in an artist’s life. By using childhood work shown next to recent works of art, this exhibition shows how some themes, forms, and content stay with the artist over the course of a lifetime.

As a child, I drew pictures, made puppets, sewed embroideries of raccoon faces. They were my totem animal, dominating childhood art imagery from the ages of 7 to 9. My primary exposure to live raccoons was to the urban cosmopolitan specimens who came at night to steal dog food from our springer spaniel who played dead from sheer fear.

I was a docile child; the raccoon’s bandit mask and air of mischief appealed. Acutely shy, I had trouble returning gazes. A 2nd grade art assignment to paint a portrait of the back of a classmates’ head was right up my alley.

A decade later, I posted an article on my dorm door, “Rabid Raccoons Cross the Mason-Dixon Line.” Good, I thought, here comes my avenging totem animal. In those days, having a southern accent up north was like wearing a dunce cap to class.

Now, I creep around the woods with my camera in search of a maddeningly elusive and clever raccoon. When I recently stumbled across these childhood art relics, I was astonished to see how closely my “new work” aligned with them.

Has my art improved? When I was little, I identified with raccoons, whether as symbol or creature or mascot, and with my handiwork I sought to represent them. Raccoons are dexterous with their hands, I aspired to similar dexterity. Now I ponder their otherness, presume less on their automatic sympathy, even as I say still I love raccoons.