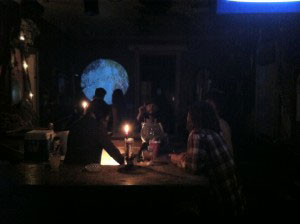 I’m pleased to join an excellent group of artists in a show of videos and other works curated by John Otte and installed at The Pearl (“Hypnotic. Laid back. Keeping me up past my bedtime. Again.”**), a unique creation of Jay Poggi’s. A satellite exhibition of New Orleans’ biennial Prospect.2, the show will be open Saturday and Sunday evenings through January 29, 2012. 639 Desire Street. New Orleans

**hoping to make my FB update their new motto!

“The Pearl is proud to present “Constant Abrasive Irritation Produces The Pearl: A Disease Of The Oyster,” a group exhibition, curated and installed by John Otte, and set within the confines of an extraordinary historic house/compound in the Bywater neighborhood of New Orleans. Here, Otte assembles a wide spectrum of local, national and international artists: AdrinAdrina, Jonathan Bouknight, Susannah Bridges-Burley, Elliott Coon, John Curry, Dawn DeDeaux, Lee Deigaard, Kim Phillips, Courtney Egan, Margaret Evangeline, Jessica Goldfinch, Brian Guidry, Dave Greber, Sally Heller, INGRIDMWANGIROBERTHUTTER, Kathleen Loe, Aristides Logothetis, Jennifer Odem, John Otte, Anastasia Pelias, Michele Schuff, Gary Stephan, Paige Valente and Delona Wardlaw. An additional evening at The Pearl in which Matthew Barney’s film “De Lama Lamina” will be shown as part of the exhibition during the early part of the Carnival (Mardi Gras) Season in January 2012 is planned. The title of the exhibition is taken from a quote by Lenny Bruce, which proclaims: “Constant Abrasive Irritation Produces The Pearl: A Disease Of The Oyster!” For this installation, Otte takes a very counter-intuitive approach by deliberately installing the videos and sculpture first, then selectively clearing away and organizing around the resulting vignettes so as not to disturb their essential character or mystery. Otte sees this as a meditation on the chaos and order of the specific site of The Pearl as well as of New Orleans itself. Videos are ceiling-mounted, wall-mounted, projected, and embedded throughout the space in a nod to the vast proliferation of tv screens and video projections currently installed in many public spaces, especially bars, restaurants and nightclubs. Sculptures are strategically placed to interact with already existing assemblages and accretions of found objects. Sound is a vital element, in many cases interpenetrating with additional sounds from one or more of the video works as well as ambient sounds from the environment. Dramatic lighting is used to isolate specific objects and assemblages. Raw and refined elements coexist in a cornucopia of elegance and decadence.

In addition to their joint photographic installation, “Shipwreck,” with a strong nod to body art and happenings, artist-personalities AdrinAdrina and Elliott Coon will present special performances to be announced. The Pearl is also pleased to present the New Orleans video debut of “The Cage” by international artist sensation INGRIDMWANGIROBERTHUTTER.

The exhibition begins Saturday October 22, 2011 and will remain open on Saturdays and Sundays (5 pm – 9 pm) and by appointment during the span of Prospect 2. In addition, The Pearl will serve as a gathering place for the public throughout the Prospect.2 run. Tapas, drinks, coffee and tea will be served every Saturday and Sunday 5pm – 9pm. Additional Sunday night Pearl parties to be announced.

John Otte was born in Virginia Beach, VA in 1963, and is an artist, dj, curator and installation specialist. Otte has lived and worked in NYC and Atlanta, and now resides in New Orleans. He curated a satellite exhibition of Prospect.1, entitled “Entr’acte” at Bush Antiques in 2008.

The Pearl, brainchild of multi-talented artist/musician/impressario, Jay Poggi, and known as a legendary speakeasy and neo-vaudevillian performance space for more than twenty years, is made up of a sprawling complex of five contiguous buildings. The main house of The Pearl was built in 1799, and is one of the original Creole farm houses built along the river in the Bywater neighborhood just a few blocks from the French Quarter.”