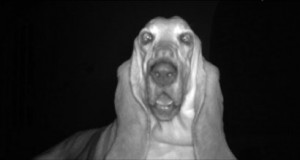 “Dog Park” G Gallery put out the open call earlier this summer for artists who use dogs as subject matter in their work. And the resulting show is indeed a winner. It has a range of mediums, from paintings to photography to sculpture, with submissions by some of the Houston art scene’s heavy hitters. A real standout is Suzy Gonzalez‘s How Much Is That in the Window?, an oil painting depicting a normal family scene — mom, dad and little boy, who’s pointing off excitedly at something out of view — except for the fact that they have dog heads instead of human. It’s like a surreal Norman Rockwell painting. James Ruby‘s Smooch 2.0 is wonderfully all snout. Theresa Crawford‘s Fixated is a regal portrait of a contemplative shih tzu, while b.moodyart’s The God Dog is a raw, emotive portrait of a bulldog, almost primitive in its acrylic sketches. There’s an extreme lightness in Nola Parker‘s Charlie I, which depicts a dog mid-air, bounding carefree through the grass. In photography, there’s a great suite of dogs at their quirkiest. Mary Magsamen and Stephan Hillerbrand turn to the family dog for their portrait ofCerebrus, who’s lying almost luxuriously in a pile of white bread. Lee Deigaard‘s goofy The Dog Who Took the Place of a Mountain is a blurry portrait of a cross-eyed bloodhound named, perfectly, Buster, while Martha M. Thomas‘s Disdaindepicts an extremely angry-looking poodle that is just raw emotion. Meanwhile, Ben Tecumseh DeSoto makes it political with Dog Realizes Death, a photograph of a frightened-looking puppy being led reluctantly by a person in rubber rain boots. The text accompanying the photo tells us that the dog is about to die by lethal injection. It’s the most heartbreaking and serious submission in this diverse show. That it’s placed next to a photograph of two dogs humping — that’s the gift of the open call. Through September 30. 301 E. 11th St., 713-869-4770. — Meredith Deliso,Houston Press, September 26, 2012