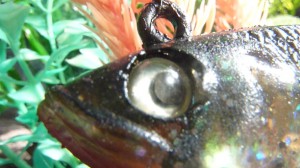 I showed two new video pieces in response to the show’s theme. In one, the oil spill and its aftermath resound. In the second, a small black video in a big gold frame proselytizes for your amusement.

In Plastic Gulf, plastic fishing lures swim through a false eden of lush plastic reeds. Animated through crude puppetry, they flirt with the viewer, become protagonists themselves rather than decoys.
After the 2010 gulf oil spill, fishing lures collected dust on bait store shelves, and fishing boats idled. Marine life choked in the oil-polluted waters.

In the Pacific Ocean there is a vast island of plastic garbage. Plastics are made from oil. Even before the BP oil spill, the Gulf of Mexico’s dead zones were growing, fed by fertilizer runoff carried by the Mississippi River from industrial farms in the Midwest.
We place a lot of trust in the regenerative powers of the ocean. We need to believe we can restore what we ruin.
In the battle for conservation resources, fish struggle to engage human sympathies. These plastic fish, innocent of their status as impostors, endeavor to meet your gaze.

The Gild: My grandmother’s old gilded mirror frame, long propped in the hallway, begged to adorn a masterpiece. But who can afford masterpieces these days? Graffitti on my neighbor’s house, “He who holds the gold RULES”, set me to thinking about various dichotomies: poverty vs wealth, lumps of coal vs nuggets of wisdom, bleakness vs. positivity, self help vs privilege, the artist vs the critic, the artist vs the system. How positive encouragement is often like mockery: deep in the art mines, the gilded turd claims pretensions to grandeur. Stand before the empty mirror frame; this artwork will shrink your head. And BUCK THE FUCK UP.